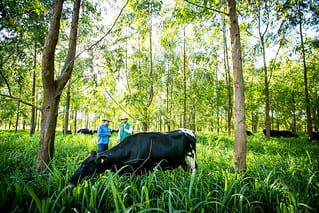 Japanese consumers are notorious for their high-tech, image-conscious approach to product purchases, whether that involves clothes, electronics, or food. Since the discovery of BSE in the domestic herd three months ago, however, everything's changed and the organic food sector has flourished. Reuter's Isabel Reynolds explains how when the modern-day beef farmer's nightmare becomes reality, it's time for society as a whole to re-evaluate its relationship with food. Increasing concerns over the health effects of intensive farming are persuading many consumers to abandon the artificial perfection of conventional fruits and vegetables for the gnarled but chemical-free produce of organic farms. Japan's first case of mad cow disease, or bovine spongiform encephalopathy (BSE), in September, plus a massive outbreak of food poisoning last year due to insanitary practices at the nation's top dairy producer, have heightened awareness. "BSE forces people to think about how food is produced and that is the first step towards understanding the value of organic [food]," said Donald Nordeng of QAI, a company licensed by the government to judge if produce grown overseas is organic. Organic food can be more than 50 percent dearer than ordinary produce, but teacher Akiko Kajikawa, lunching with a colleague at a recently opened organic cafe in central Tokyo, says money is irrelevant when it comes to health issues. "I want to eat organic food," Kajikawa said. "But I often have difficulty getting hold of it, so I'm really happy to get lunch here." The Japanese market for organic products was estimated at between $3.7 billion and $4.5 billion last year, compared with $1.5 billion five years earlier. "We have seen an explosive growth in Japanese customers over the past year," said John Bayles, whose mail-order company, Tengu, supplies imported natural foods. His firm used to attract mostly expatriates, but Japanese now make up around 50 percent of the clientele. In another sign of expanding interest, Biofac, Japan's first large-scale fair for natural food, will be held near Tokyo this month. "We feel that consumer interest in organic food is rising, but production and distribution is lagging," said a spokesman for the organisers. "We're hoping the event will help to redress the balance." Cramped farming Although organic farms are benefiting from the expanding market for natural foods, they face a daunting array of problems. Japan's warm, humid summers make an ideal environment for plant diseases and pests to thrive. Ordinary farmers thus tend to use far more chemicals than their North American counterparts -- some estimates put the figure at seven times as much. Then there is the problem of space, or lack of it. Home to 127 million people, Japan's land area is smaller than California's, and much of it is mountainous. Tiny farms are crammed together wherever there is arable land and organic produce can easily be contaminated by a neighbour's use of chemicals. "There is no choice but to set aside a buffer zone within your own land," said Sanae Sawanobori, a university lecturer in agriculture who also helps out on her family's two-hectare (five-acre) organic fruit farm. Sawanobori, whose parents switched to organic production after her mother suffered a serious bout of chemical poisoning, said the government should provide more support in the form of finance and advice for organic farmers. Change not easy Farmers who convert from conventional production face hefty start-up costs for equipment. Many also struggle at first because the Japan Agricultural Standard law says land must be free of artificial chemicals for up to three years before produce can be designated organic. The law, which came into force in April, defines standards for organic production so that consumers can be sure the produce they buy is chemical-free. "It (government support) is practically non-existent," Sawanobori said. "The situation is very difficult after the government set up the labelling system in the spring, without any back up." A spokesman for the Ministry of Agriculture, Forestry and Fisheries said it was trying to help farmers as a whole, rather than favouring organic producers. "Our point of view is that food produced with agricultural chemicals is perfectly safe," said Kiyoshi Fujimoto of the ministry. "But there seems to be a demand (among consumers) for something beyond safety, a kind of trust." Many conventional farmers are intimidated by the prospect of learning a completely new method of production, he said. "There is great unease on the production side about organic farming," he said. "Until now, farmers knew exactly how big a harvest they could expect using a given method and a given amount of chemicals." Import fears Daunted by the expense of Japanese organic foods, some retailers are turning to cheaper imports to satisfy demand. An affiliate of rail company East Japan Railway Co <9020.T> caused a stir in July when it began selling boxed lunches containing organic rice imported from the United States. Major convenience store chain Lawson <2651.T> is planning to use organic vegetables grown on its own farms in China in all its prepared foods beginning next spring. A company spokesman said it was not yet clear if the produce would receive Japanese organic certification. At present, Japan only recognises the certification of European Union countries and Australia. Gaining recognition for products from other countries is a lengthy process, because a certifier must be sent from Japan to inspect each farm. The idea of turning to foreign producers for staple foods is as unpopular in some organic circles as among other farmers. Sawanobori said inexpensive imports from China and other Asian countries may be good for the consumer in the short term, but may cause enormous damage to Japan's own agriculture. "Plus, when the Chinese start wanting to eat their own healthy food, supplies to Japan will dry up, creating a food security problem," she said. © Reuters 2001. All rights reserved. Republication or redistribution of Reuters content, including by caching, framing or similar means, is expressly prohibited without the prior written consent of Reuters. Reuters and the Reuters sphere logo are registered trademarks and trademarks of the Reuters group of companies around the world.